A dramatic case of deja vu…

The great Vincent Price (1911 to 1993) achieved legendary status in classic horror movies such as Dracula, The Fly, The Masque of the Red Death and The Witchfinder General. He also famously provided the narration for Michael Jackson’s Thriller and was a colossus of the acting profession. However, for a man who became synonymous with the Horror genre, Price initially had very little interest in the paranormal. That was until a most peculiar event occurred in 1958.

Price was flying to New York when a storm flared up causing the pilot to delay landing. As the aircraft circled high above the seething cauldron of dark clouds, the actor felt a curious urge to look out of the window. As he peered into the darkness, a sudden flash of lightning seemed to dance through the twilight and reveal a cryptic message which hung ominously in the sky:

Shocked and startled, Price asked the passenger beside him to look out and verify that the message was real. Bizarrely when they both looked out into the gloom, the sinister words had vanished. The performer was extremely perturbed and distressed by this weird event. Had he imagined this? Was it merely some sort of queer trick of the light? His mind turned to Tyrone Power himself (a close friend) and a terrible feeling of dread began to grip his entire being. 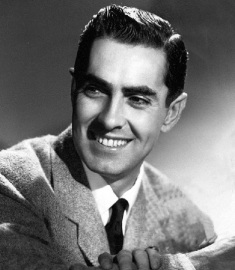 Power lived near Price in Los Angeles, and the two superstars had struck up a close and enduring friendship. Well known for his roles in classic movies such as The Mark of Zoro, Tyrone Power had established himself as one of Hollywood’s biggest box office draws, and was a household name the world over.

On alighting from the aircraft, Price frantically asked police and staff at the airport if they had seen the strange message in the sky. His inquiries were promptly dismissed and the actor was quickly ushered through the terminal. Even a fleeting consultation of the most recent newspapers on display did not yield any mention of Tyrone Power. Was he going mad? He was certain he had seen those terrifying words high above the Big Apple. 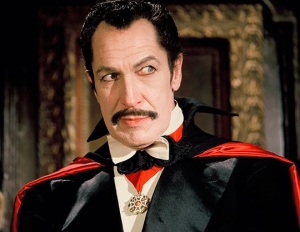 Vincent Price in one of his most famous roles as Count Dracula.

Later that evening Vincent Price checked into his hotel in central New York and had just about managed to forget the disturbing events of his journey. Suddenly in the lobby he spotted an old acquaintance from his early years in acting striding anxiously towards him.

‘Vincent, have you heard the news?’ inquired the man. ‘Tyrone Power died of a heart attack in Madrid tonight.’

The author of the article is David Fox who is a freelance writer and entertainer based in the UK. Visit David’s website at: