The Man Who Immortalised ‘Kojak’

The late, great Telly Savalas is most certainly not the type of personality one would associate with anything of a supernatural nature. Charismatic, straight-talking and with talent in abundance, Savalas became a household name from the 1970s onwards for his masterful portrayal of the indefatigable New York detective Kojak. Revered throughout Hollywood and beyond, the world-famous actor, singer and celebrity passed on in January 1994. However, it is a curious tale from the late 1950s which caught my attention several years ago… 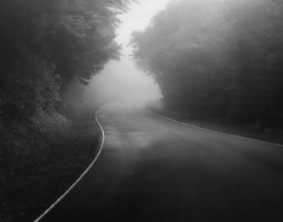 The story involves Savalas’s bizarre experience when driving home from a social event in Long Island during the small hours. Accounts vary as to where he had been, but Savalas became stranded on a lonely stretch of highway after his car ran out of petrol. Pondering his rueful situation, he decided to leave his vehicle and seek out a service station.

Eventually, after travelling on foot for some time, a passing motorist spotted the lonesome pedestrian, stopped his vehicle, and kindly offered Savalas a ride. The actor recounted how the driver of the car appeared to be rather unusual and spoke in a curiously high pitched and unnerving tone. Nonetheless he persevered with this rather eccentric nocturnal Samaritan, collected petrol at the station, and accepted a ride back to his abandoned vehicle. The mysterious driver even lent Savalas a few dollars to pay for the fuel and, feeling very embarrassed, the actor requested his name and telephone number so that he could return the funds to him in due course. Savalas also remembered the driver speaking suddenly about a relatively obscure baseball player. The sudden change in conversational topic had been rather unsettling to say the least. On arriving back at his car, Savalas duly thanked the man for all his help and bid him goodnight.

Savalas returned to work the next day and quickly forgot about the events of the previous evening until he happened to notice a headline on the front page of a local newspaper. The story was about the sudden death of an up-and-coming baseball star. Bizarrely it was the very sportsman who the driver had spoken of during their journey together. Savalas decided to call the telephone number he had been given in order to return the borrowed money and put closure on the event. However, on telephoning, matters took an even more mysterious and disturbing twist…. 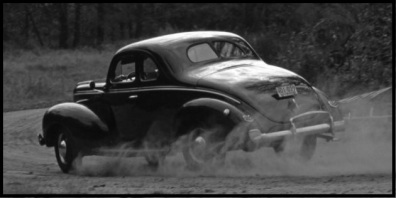 Who was the strange driver who gave Telly a ride?

The man from nowhere…

On phoning the hand-written number, Savalas was greeted by a woman’s voice. He promptly requested to speak to the gentleman who had assisted him the previous night. In no uncertain terms, the actor was informed that the man he asked for had been dead for some time. It eventually transpired that the woman at the end of the line was the ‘late’ driver’s widow and, after some deliberation, Savalas eventually managed to arrange a meeting with the lady.

Tough guy. The only type of spirit we would usually associate with Telly would be found in a bar.

Savalas showed the woman the scrap of paper which bore the telephone number and name of the spectral driver. The handwriting appeared to match with that of the deceased. He also discovered that the gentleman had shot himself through the throat which may have explained why his ‘ghost’ spoke with such a high-pitched accent.

David Fox is a professional magician who is based in the Midlands, UK, and travels throughout the world performing his unique brand of prestidigitation. He specialises in close-up magic, parlour magic and stage magic. Magician David Fox creates many of his own incredible effects and sensational illusions.

Intersted in the performing arts? For music, art and inspiration, check out my friend’s new blog: BarbaraCalvertBenner

Nestled away in the picturesque environs of Clifton Conservation Village to the south west of Nottingham city centre, the imposing Georgian architecture of Clifton Hall boasts a certain majestic charm. A striking reminder of a bygone age when the Lords of the Manor of Clifton celebrated their wealth and influence throughout Nottinghamshire and beyond. The hall has a colourful history, and in 1631 King Charles I resided there at the behest of Sir Gervase Clifton. Indeed, since the estate was sold off by the Clifton family in 1958, it has been utilised by several owners for much different purposes. Firstly as a girls’ grammar school until the 1970s, then by Nottingham Trent University, and later as private luxury accommodation. However, it was under its most recent ownership that Clifton Hall sprang to the attention of both local and national media outlets.

Reports of Clifton Hall being a site of unusual and inexplicable phenomena would appear to date from the time when it was used as a grammar school from 1958 to 1976. There are accounts of strange eerie noises and an unsettling atmosphere in specific locations around the main building. An eye-witness account of the ghost of a young woman in the vicinity is also most revealing, and there appears to have been speculation about supernatural activity within rooms which had been sealed off. Sceptics would argue that such locations are ripe for curious tales of intrigue which are often intended to scare younger boarders and are the mere products of vivid adolescent imaginations. Nonetheless, it is the sensational experiences of the Rashid family, who moved into the hall in 2007, which have attracted much attention and speculation.

In 2007 businessman Anwar Rashid acquired Clifton Hall for the sum of £3.6 million and moved into the property with his wife and four children. Within eight months the family would have left their new home, driven away by seemingly disturbing and unsettling forces from another dimension. An intriguing cavalcade of psychic phenomena contributed to the family’s hasty decision to quit their stately accommodation. Eerie events included: sinister spectral voices, ghostly sightings, and, perhaps most upsetting of all, the manifestation of blood stains upon one of the children’s bed sheets. Mr Rashid even went so far as to invite psychic investigators to Clifton Hall to reckon with its demonic denizens. The coordinator of this metaphysical inquiry curiously concluded that the venue was one of the most unsettling places he had ever visited, even throughout the hours of daylight. The family ceased mortgage payments in 2008 and since then it has been on the market awaiting a new buyer to negotiate with its supposedly supernatural tenants…

Did ghosts and supernatural phenomena really drive a family away from their new home? Is Clifton Hall truly an unholy lair of queer and unnatural events? Or perhaps there is a more logical explanation for the strange occurrences which would appear to have been experienced by a variety of individuals since its days as a grammar school? Last week I happened to be in Clifton meeting a client in order to prepare for a performance of magic at a function he is currently organising. On the way home, I decided to visit the hall and took some photographs around the area. The photograph below was taken at the main gate. Strangely a friend of mine (who is a psychic) examined my handiwork and felt a curious ‘presence’ at the central upper window in the shot. On a closer analysis of the picture, it is possible to see some unusual whispy ‘faces’ on both the central panes of the window. What do you think? Could this be evidence of some sort of weird supernatural manifestation, or is it simply the reflections of the trees in the sunlight? 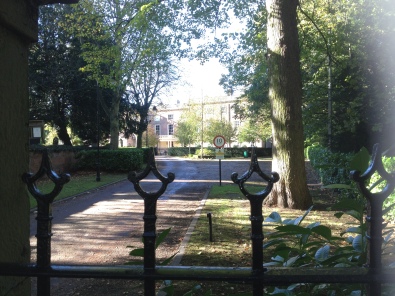 Below is a close-up shot of the window. It does look rather strange and no other window in any of the other photographs looks like this. I prefer to keep an open mind and reserve judgement.  The red and blue circles mark the possible outlines of spectral ‘faces’.