‘even in the darkest of night, you can always hear the King’s call’

Everyone loves Elvis. His star shines brighter than ever before, and both young (and not-so-young) rock and rollers the world over continue to affectionately embrace his legend. At the time of writing it is estimated that The King has sold over ONE BILLION records worldwide! An astonishing legacy and a fitting testament to his enduring appeal. But since his untimely demise in 1977, has Mr Presley returned to this earth for a posthumous encore (or several) from beyond those pearly rhinestone-studded gates?

It’s time for a Little Less Conversation folks! Let’s slip on those Blue Suede Shoes and investigate some weird and wonderful events which are guaranteed to leave you All Shook Up… 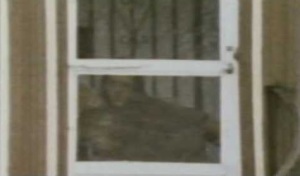 The ghost of Elvis sitting in a doorway?

This mysterious photograph was taken on new year’s eve 1977 at Graceland. Many believe that it is an apparition of the beloved musician gazing out across the pool area. However, Suspicious Minds conclude that it is simply a trick of the light and merely wishful thinking. Nonetheless, this image fuelled much speculation at the time.

Elvis behind the blind, or just the Devil in Disguise?

There have been numerous reports of paranormal phenomena at Graceland over the past forty years. Mysterious images have been captured on film, inexplicable sounds are often heard, and a peculiar presence is frequently encountered in the kitchen area. Most reports are promptly debunked and stamped ‘Return to Sender’ but some remain unexplained…

Who is the mysterious quiffed figure who was captured on security camera at Graceland?

Apparently Las Vegas is another popular haunt for The King, and residents of the Hilton Hotel have witnessed his appearance in the lobby and casino. This was where Elvis performed his final show on 12th December 1976 and, if these claims are to be believed, he remains attached to the venue. Even more outlandish sightings around the city involve Elvis’s ghost driving a Cadillac!

Viva Las Vegas! The Hilton Hotel was the venue of Elvis’s final gig.

Poltergeist-type activity often occurs in the RCA Recording Studios at Nashville, Tennessee, where the great man cut his early recordings and paved the way for superstardom. Objects frequently move as if they have a mind of their own, loud banging and footsteps are heard which cannot be explained, doors are opened by unseen hands, and lights switch on and off by their own accord! It is widely accepted throughout the studio that it is Elvis himself causing everything to Shake, Rattle and Roll! 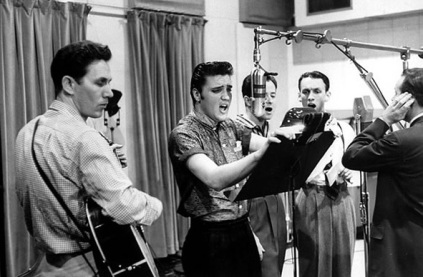 Such spooky tales are likely to leave many of us sleeping with the lights on and reaching for our Teddy Bear. There are truly many things in this world that cannot be explained, and eye-witnesses are convinced that they have been blessed with a visitation from The King of Rock and Roll himself. That said, those with a Wooden Heart would argue that such tales can be readily explained after scientific investigation. Graceland is one of the most filmed and photographed locations on the planet so the occasional queer image is bound to surface from time to time.

Nonetheless, the spirit of The King lives on. We will all continue to celebrate the great music and talents of Mr Elvis Aron Presley regardless. That truly is The Wonder of You…

The author of the article is David Fox. A professional entertainer and freelance writer who is based in the UK. For more about David, visit his website: